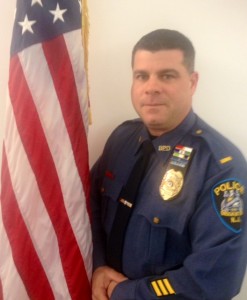 Lieutenant Robert Rubino is currently serving as The Brigantine Police Department Accreditation Manager and Squad Two Watch Commander.  Special areas of interest are Patrol Management, Policy Development and Review, Accreditation Compliance, Grant Identification and Composition, assisting in the efficiency of the police department during trying economic times, while maintaining a primary vision for the safety of officers. I initiated the accreditation process for the Brigantine Police Department in 2005 and the department received accreditation through the New Jersey State Association of Chiefs of Police in 2008.  I am responsible for creating and revising in excess of 100 General Orders and Standard Operating Procedures and have aided in the development of recruitment and promotional processes. I have also written successful grants which have included Safe and Secure Communities Grants, Safe Routes to Schools Grant, Technology and Equipment Grants and numerous other Traffic Enforcement Grants.

Experience Skills Past and Present:

Assigned to Investigations Unit on a rotational basis. Primarily assigned to narcotics investigations and acquired training in crime scene processing.

Leadership as a science